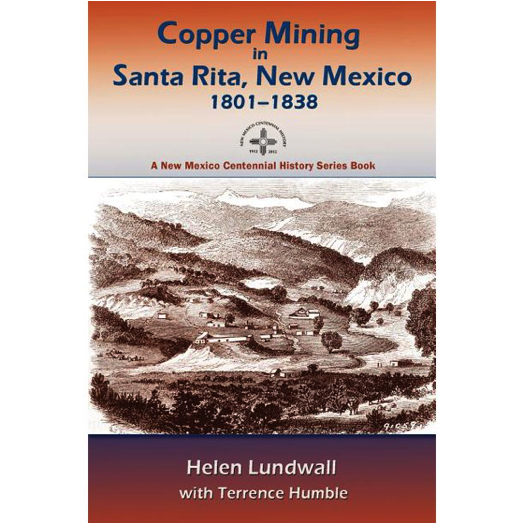 By Helen Lundwall with Terrence Humble

Copper Mining in Santa Rita, New Mexico, 1801-1838 is the story of the formative years of a remarkable mine in southwestern New Mexico that has produced copper for more than 200 years. Records of the Spanish Colonial and early Mexican period have yielded intriguing accounts of the people involved in the early development of the mines, the difficulties they encountered along the way, and the importance of this small settlement to the history of the frontier. Although the Santa Rita mines produced a fortune to the few men willing or able to invest money in their development, it was always a difficult and hazardous undertaking.

Apaches, who inhabited much of southern New Mexico and Arizona at that time, created many problems for the miners. They had a strong influence over the success or failure of the Santa Rita mining operation. At times the hostility and depredations of these Indians overshadowed the remarkable success of the mines. Santa Rita was the center for military operations against the Apaches, and was referred to as the watchtower and guardian of the western frontier. 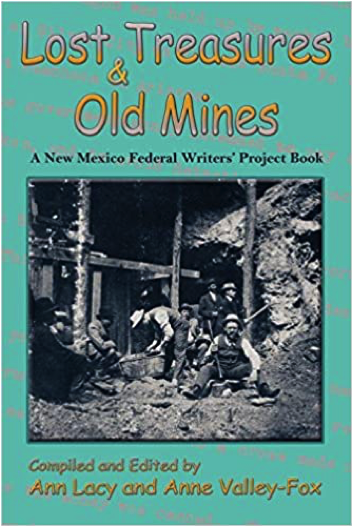 Stories about mines and treasures from writers in the Federal Writers’ Project in New Mexico between 1936 and 1940.

Between 1850 and 1912, Territorial New Mexico was home to a diverse mix of peoples..

Lost Treasures & Old Mines brims with stories of gold fever, copper ore and silver mining in the American Southwest. In 1541 when Coronado’s conquistadors arrived in search of the fabled Seven Cities of Cibola, pre-Columbian natives had long been mining for turquoise. The stories in this collection tell of hidden Indian mines, treasures lost in route to Spain, gold heists on trains and stagecoaches, placer miners roaming the hills and chicanery among claim partners. Geronimo, Victorio, Billy the Kid and U.S. Calvary soldiers thread through these stories, along with lucky characters who strike the motherlode and hapless ones who lose their fortunes. The Lost Juan Mondragon Mine, The Dead Burro Mine, the Lost Mine of the Pedernal, the Adams Diggings, Elizabethtown and Pinos Altos—such places live as shining memories in these oral histories of fabulous fortunes lost and found.

Between 1936 and 1940, field workers in the New Deal Works Project Administration’s Federal Writers’ Project recorded authentic accounts of life in the early days of New Mexico. These original documents, published here for the first time as a story collection, reflect the conditions of the New Mexico Territory as played out in dynamic clashes between individuals and groups competing for control of the land and resources. 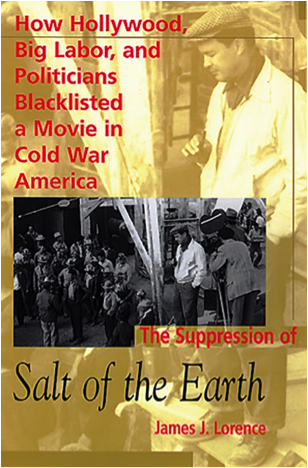 How Hollywood, Big Labor, and Politicians Blacklisted a Movie in the American Cold War

This impassioned history tells a story of censorship and politics during the early Cold War. The author recounts the 1950 Empire Zinc Strike in Bayard, New Mexico, the making of the extraordinary motion picture Salt of the Earth by Local 890 of the International Union of Mine, Mill, and Smelter Workers, and the film’s suppression by Hollywood, federal and state governments, and organized labor. This disturbing episode reflects the intense fear that gripped America during the Cold War and reveals the unsavory side of the rapprochement between organized labor and big business in the 1950s. In the face of intense political opposition, blackballed union activists, blacklisted Hollywood artists and writers, and Local 890 united to write a script, raise money, hire actors and crews, and make and distribute the film. Rediscovered in the 1970s, Salt of the Earth is a revealing celluloid document of socially conscious unionism that sought to break down racial barriers, bridge class divisions, and emphasize the role of women. Lorence has interviewed participants in the strike and film such as Clinton Jencks and Paul Jarrico and has consulted private and public archives to reconstruct the story of this extraordinary documentary and the coordinated efforts to suppress it. 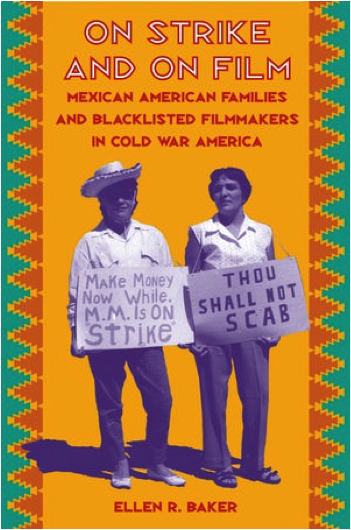 In 1950, Mexican American miners went on strike for fair working conditions in Hanover, New Mexico. When an injunction prohibited miners from picketing, their wives took over the picket lines--an unprecedented act that disrupted mining families but ultimately ensured the strikers’ victory in 1952. In On Strike and on Film, Ellen Baker examines the building of a leftist union that linked class justice to ethnic equality. She shows how women’s participation in union activities paved the way for their taking over the picket lines and thereby forcing their husbands, and the union, to face troubling questions about gender equality.

Baker also explores the collaboration between mining families and blacklisted Hollywood filmmakers that resulted in the controversial 1954 film Salt of the Earth. She shows how this worker-artist alliance gave the mining families a unique chance to clarify the meanings of the strike in their own lives and allowed the filmmakers to create a progressive alternative to Hollywood productions. An inspiring story of working-class solidarity, Mexican American dignity, and women’s liberation, Salt of the Earth was itself blacklisted by powerful anticommunists, yet the movie has endured as a vital contribution to American cinema. 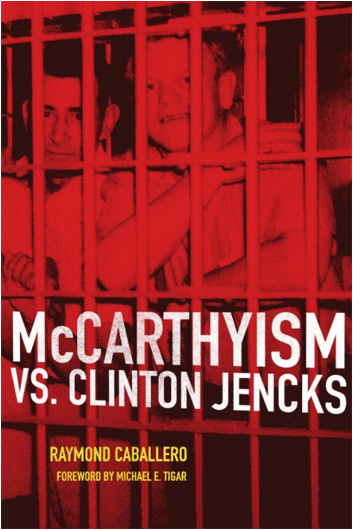 For twenty years after World War II, the United States was in the grips of its second and most oppressive red scare. The hysteria was driven by conflating American Communists with the real Soviet threat. The anticommunist movement was named after Senator Joseph R. McCarthy, but its true dominant personality was FBI director J. Edgar Hoover, who promoted and implemented its repressive policies and laws. The national fear over communism generated such anxiety that Communist Party members and many left-wing Americans lost the laws’ protections. Thousands lost their jobs, careers, and reputations in the hysteria, though they had committed no crime and were not disloyal to the United States. Among those individuals who experienced more of anticommunism’s varied repressive measures than anyone else was Clinton Jencks.

Jencks, a decorated war hero, adopted as his own the Mexican American fight for equal rights in New Mexico’s mining industry. In 1950 he led a local of the International Union of Mine, Mill, and Smelter Workers in the famed Empire Zinc strike—memorialized in the blacklisted 1954 film Salt of the Earth—in which wives and mothers replaced strikers on the picket line after an injunction barred the miners themselves. But three years after the strike, Jencks was arrested and charged with falsely denying that he was a Communist and was sentenced to five years in prison. In Jencks v. United States (1957), the Supreme Court overturned his conviction in a landmark decision that mandated providing to an accused person previously hidden witness statements, thereby making cross-examination truly effective.

In McCarthyism vs. Clinton Jencks, Caballero reveals for the first time that the FBI and the prosecution knew all along that Clinton Jencks was innocent. Jencks’s case typified the era, exposing the injustice that many suffered at the hands of McCarthyism. The tale of Jencks’s quest for justice provides a fresh glimpse into the McCarthy era’s oppression, which irrevocably damaged the lives, careers, and reputations of thousands of Americans. 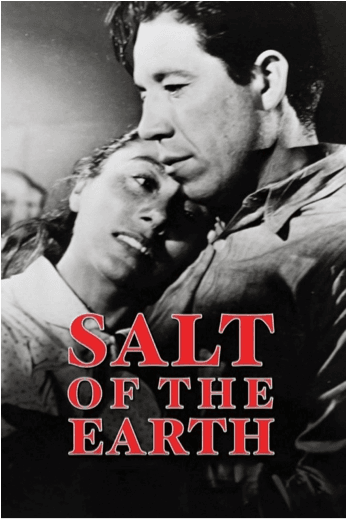 Directed in 1953 by one of the infamous “Hollywood Ten,” Herbert J. Biberman, Salt of the Earth was a collaborative effort by some of the most notable and talented blacklisted filmmakers, including Michael Wilson (Lawrence of Arabia), Paul Jarrico (Tom, Dick and Harry) and Will Greer (In Cold Blood). Despite severe pressure from the US Government and such powerful figures as RKO studio chief Howard Hughes, this award winning team created one of the most compelling family dramas and heart-rending romances of the 1950’s. Based on the 1950 strike by zinc miners of Local 890 of the International Union of Mine, Mill and Smelter Workers in Silver City, New Mexico, Salt of the Earth explores the complex issues of labor relations, minority rights and the struggle of women to achieve equality in their daily lives. Against a backdrop of social injustice, a riveting family drama is played out by the characters of Ramon and Esperanza Quintero, a Mexican-American Union leader and his wife.

Witness the film that dared to defy McCarthy ravaged Hollywood and the blacklist! 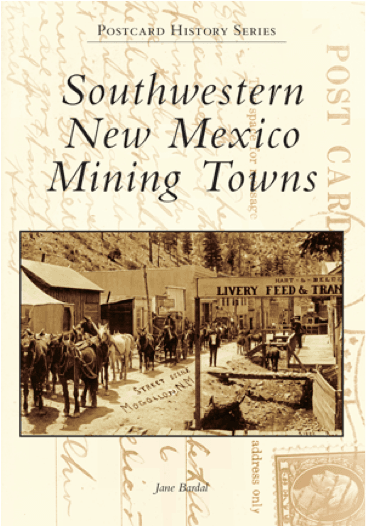 Spanish and American prospectors discovered gold, silver, and copper mines in southwestern New Mexico in the 1800s. This volume explores the further development of these mining operations into the early 1900s. During this time period, improvements in technology made mining profitable, and eastern corporations invested in New Mexico mines. World War I created a demand for copper, and this era saw the development of paternalistic company towns. Miners faced difficult and dangerous working conditions, but their lives improved compared to previous generations. Many of the towns and the people in southwestern New Mexico owed their livelihood, in whole or in part, to mining. Some of these places have disappeared entirely, some are ghost towns, and others are thriving communities. 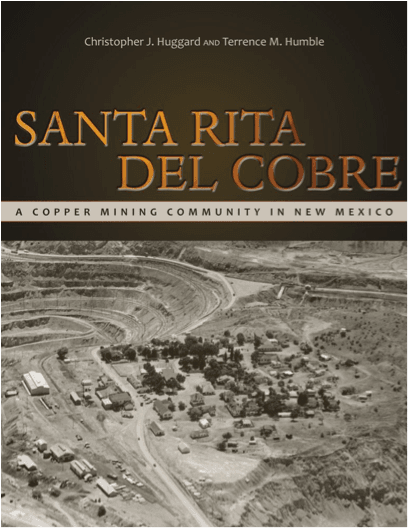 The Spanish, Mexicans, and Americans, successively, mined copper for more than 200 years in Santa Rita, New Mexico. Starting in 1799 after an Apache man led the Spanish to the native copper deposits, miners at the site followed industry developments in the nineteenth century to create a network of underground mines. In the early twentieth century these works became part of the Chino Copper Company’s open-pit mining operations-operations that would overtake Santa Rita by 1970. In Santa Rita del Cobre, Huggard and Humble detail these developments with in-depth explanations of mining technology, and describe the effects on and consequences for the workers, the community, and the natural environment. Originally known as El Cobre, the mining-military camp of Santa Rita del Cobre ultimately became the company town of Santa Rita, which after World War II evolved into an independent community. From the town’s beginnings to its demise, its mixed-heritage inhabitants from Mexico and United States cultivated rich family, educational, religious, social, and labor traditions. Extensive archival photographs, many taken by officials of the Kennecott Copper Corporation, accompany the text, providing an important visual and historical record of a town swallowed up by the industry that created it.